Total Members in the Group: 5 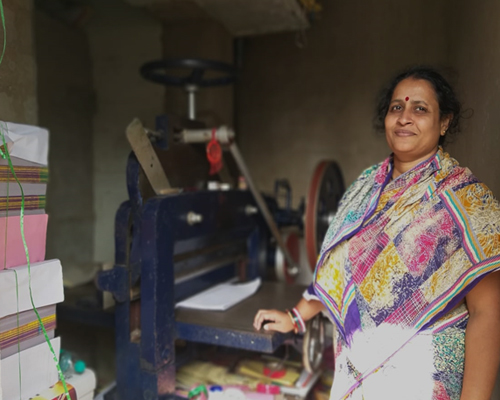 Strong urge to earn for the family and support them financially fuel women’s motivation for entrepreneurship. Women in India also face intangible barriers under social norms. Overcoming those barriers, coming out of the shell made for them to only do the domestic chore and childcare is itself a very tough task. Still they are excelling by their effectual and competent involvement in entrepreneurial activities.

Anita Maharana, a woman who didn’t want to feed herself on her husband’s earning, who didn’t want to compromise on her kids’ education and personal desires, went against all odds, broke all the social constraints and formed a Joint Liability Group in her locality to apply for a loan from microfinance company and start her own business.

In the year 2015, she applied for loan from Mahashakti Foundation and was sanctioned with ₹25,000 for starting a book binding business. She then took a jewel loan from bank by putting all her jewelleries as collateral and purchased a book binding machine of ₹70,000. When a woman is determined to achieve success, no force in this world can stop her. The business skyrocketed and she had a good amount of surge in her income.

In the year 2017, she took a second cycle loan fromSampark Fin Services Pvt. Ltd., (NBFC promoted by Mahashakti Foundation) and again a third cycle loan of ₹50,000 from Sampark in the year 2019. At present, her business is going well,she’s taking order from several shops and is earning a profit of ₹25,000-30,000 a month.

Although, she didn’t come from a poor family, it was not necessary for her to work and earn to feed herself and her family, but she didn’t want to compromise on her wants and dreams. She’s definitely an example for many women, who don’t prefer staying inside the four walls of the house but work to earn an identity for themselves.