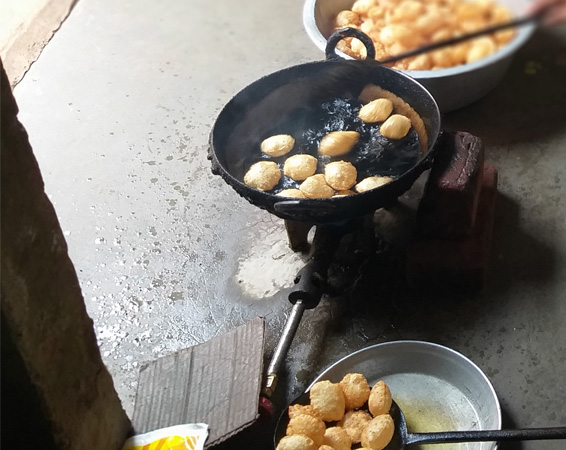 Difficulties faced prior to Joining:

It had become very difficult for a family of five members to depend on a single person for their sustenance. RaghuramSahu, Rashmita’s Husband worked as a security guard in a society in Bhubaneswar. Whatever he earned, he sent a part of it to his home for his family. Rashmita’s in-laws were aged and not in a stage to work. Her sister-in-law was in college.It was painful for them to manage her educational expenses, as they were not even in a position to afford for the cost incurred to manage their day-to-day activities.

Rashmita decided to take the responsibility of her family and with the help of Sampark Fin Services, she started her own microenterprise. She applied for a loan amount from SFS in the month ofMarch, 2018. She received INR 20,000 for 18 months and with this amount she kick-started her Panipuri business. She was lucky to have got support from her family members. Rashmita along with her mother-in-law made the dough, fried the Puri, made the stuffing and prepared the Pani at home. In the evening, she with her father-in-law went outside to sell it at two different locations of Chhamunda. Her Panipuri became an instant Hit in the village, as she didn’t have a single competitor there. The earnings were re-invested in the business and a good amount of profit was earned.

With this, she could make a daily income of INR 750. She used part of the profit in the business and part of it for household expenses. Her sister-in-law could go to college to complete her education and the family could live a financially stable life. The struggle for the basic needs was put to rest. Moreover, she could give her aged in-laws proper medical care at times when they needed it the most. She also started saving a part of the earning in bank as a recurring deposit for future uses.

Sampark Fin Services Pvt. Ltd. is glad to become a part in the success of RashmitaSahu. She’s an example of independent women who do not want to feed themselves on their spouse’s earnings, instead they want to take the responsibility to be the breadwinner of their family and earn their own identity in the society.